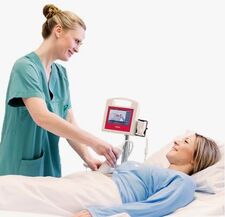 To Cath or Not To Cath...
​
In the US, up to five million urinary catheters are placed annually.  Between 12% and 25% of all hospitalized patients will receive a urinary catheter during their hospital stay, with as many as half not having an appropriate indication.

It is well established that the duration of catheterization is directly related to risk for developing a urinary tract infection.  With a catheter in place, the daily risk of developing a urinary tract infection ranges from 3% to 7%.  When a catheter remains in place for up to a week, bacteriuria risk increases to 25%; at one month, this risk is nearly 100%.  Among those with bacteriuria, 10% will develop symptoms of UTI (fever, dysuria, urgency, frequency, suprapubic tenderness) and up to 3% will further develop bacteremia.
How-to Guide: Prevent Catheter-Associated Urinary Tract Infections. Cambridge, MA: Institute for Healthcare Improvement; 2011. (Available at www.ihi.org).

The most commonly accepted method to determine whether to catheterize is an ultrasound bladder scanning test.

According to a 2002 article in the Journal of America Medical Informatics Association, 2 million patients acquire nosocomial (hospital-acquired) infections during hospital stays annually. These infections result in 19,000 deaths annually. The annual cost to treat these infections is $28-$34 billion.

According to an estimate from the CDC published in 2001, healthcare-associated UTIs resulted in an excess cost to the U.S. healthcare system of more than $400 million annually.

Synopsis of regulation (F315); three aspects:
1) A resident who does not have an indwelling urinary catheter does not have one inserted unless the resident’s clinical condition demonstrates that it was necessary.

A review of the evidence based practice (EBP) literature has determined that any assessment of UI should include the availability of an ultrasound bladder scanner to determine post void residual (PVR) urine amounts
(Centers for Medicare and Medicaid Services [CMS], 2006; Lekan-Rutledge, 2004, 2006; McCliment, 2002; Newman et al., 2005; Sparks et al., 2004)

Non-compliance with Tag F315 can be costly:
Level 4 immediate jeopardy to resident health or safety
Carries fines of $3550 to $10,000 per day. An example of a severity level 4 deficiency is complications resulting from utilization of a urinary appliance without medical justification or extensive failure in multiple areas of urinary incontinence or catheter management.

Level 3 actual harm that is not immediate jeopardy
Carry fines up to $3,000 per day. Examples of this level include failure to provide appropriate catheter care, development of a symptomatic UTI from an unnecessary catheter, failure to assess and manage retention (PVR), decline of failure to improve continence status, and complications due to UI macerations, erosion, embarrassment, and humiliation.